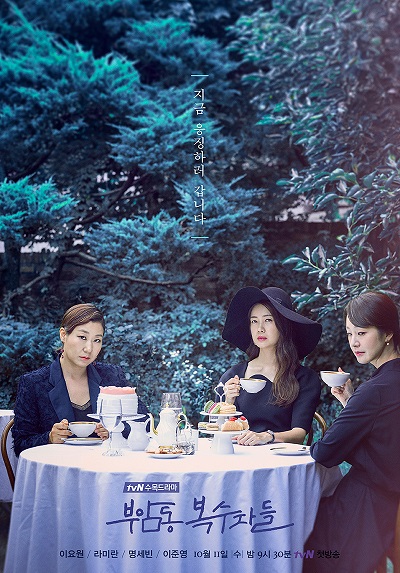 This drama is based on webcomic “부암동 복수자 소셜클럽/Buam-dong Revenge Social Club” by “사자토끼 / Sajatokki” which was published from 2014-Sep-2 to 2016-Dec-27 via “comic.daum.com/webtoon“. It’s tells the story of three women from different walks of life – the daughter of a chaebol, an ahjumma in a fish market, and a housewife – come together to enact revenge. Kim Jung Hye (Lee Yo Won) is the daughter of a family who runs a big company. She appears straightforward and arrogant, but she is actually naive and cute. Her marriage was made to benefit both families. She tries her best as a wife, but she learns that her husband has betrayed her. To get revenge, she leads the “Bok Ja Club”. Meanwhile, Hong Do Hee (Ra Mi Ran) sells fish at a traditional market and raises her two kids alone. Her husband passed away. She is bright and good nature. Her son gets involved in a violent incident at school. She then joins the “BokJa Club”. The third one is Lee Mi Sook (Myung Se Bin) who was an orphan and married. She has tried hard to have a happy family with her university professor husband, but he is violent towards her. She begins to think about her life after she meets Kim Jung Hye and and Hong Do Hee. The last one is Lee Soo Kyum (Jun) who joins the “Bok Ja Club” to take revenge on his biological parents. His father is Kim Jung Hye’s husband. Before his father married Kim Jung Hye, he had a fling with a woman who gave birth to Lee Soo Kyum. His biological parents have neglected him since.
Cast Stars
Avengers Social Club trailer:
View More Video Show All Episodes
Comments
Comments
Follow us on
News Telegram Discord