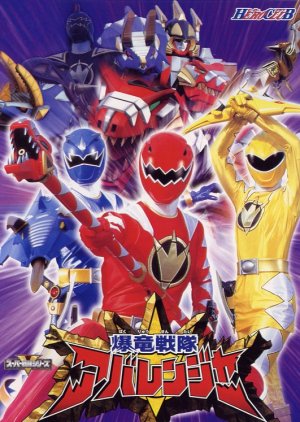 Scientists believe that 65,000,000 years ago, a meteorite's crash on Earth killed off the dinosaurs, but in truth, it split Earth into two parallel universes: Dino Earth, an Earth where dinosaurs were still the superior species, and our Earth, referred to as Another Earth by the residents of Dino Earth. Overtime, the Dino People and Burstosaur races came into being on Dino Earth but were at war with the Evoliens, entities that emerged from the meteor. The two Earths are separate until Asuka, a Dragonoid from Dino Earth, arrives on Earth via a transdimensional portal. However, he is followed by the Evoliens in their Anamolicarus spaceship and the three Burstosaur under their control. As the Burstosaur Tyrannosaurus, Ptreranodon, and Triceratops attack Tokyo, a call is sent out to three destined ones who possess Dino Guts to gain the powers to tame the three beasts. Together with their Burstosaur partners, the three become Abarangers to protect their dimension from the Evoliens.
View More Video Show All Episodes
Comments
Comments
Follow us on
News Telegram Discord