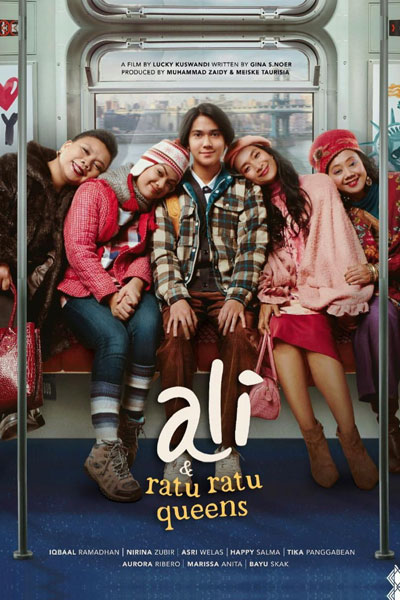 In Jakarta, 17-year-old Ali watches his dying father, Hasan, die of cardiac arrest. His mother, Mia, left them when he was five for New York City. He flies there to meet her, though his helicopter aunt Suci asks him to go home after two weeks. Ali goes to the apartment at Queens where his mother stayed at, and meets her friend Party, who works as a cleaning lady. She shares the same apartment with bonek-turned-paparazzi Biyah, helicopter single mom Ance, and massage lady Chinta. Compensated with money, they pledge to help him search for Mia. Meanwhile they also guide Ali through New York, and he also has a crush on Ance's Indonesian-American daughter Eva. Through a friend, Biyah learns that Mia lives at a house in Fort Greene, Brooklyn. Ali goes there bringing a box of rendang, but Mia, shocked, immediately slams the door. Ali also learns that his mom has a new husband, Alex, as well as a son and daughter. The next day, Ali re-attempts, and he tells her of his father's death. Mia expresses condolences, and shares him her phone number, making an appointment at a cafe. From there they enjoy times together, but ends in awry as Ali asks his mom to recognize him in her new family; she says this could end the household. She also reveals that Hasan never understands her, prohibiting Ali from flying to New York with the ticket she purchased. The more Ali meets Mia, the more she feels guilty, exacerbated by Biyah, Ance, and Chinta's passive-aggressiveness towards her. She decides to hand Party a US$20,000 check directed towards Ali. Ali feels betrayed by the Party, Biyah, Ance, and Chinta, assuming they just want his money, and leaves the apartment. Meeting his mom, he reluctantly asks her to disown her. She tearfully responds, "Just hate me. Just hate me! Go!" and Ali obliges. He meets Eva and asks for a hug; Eva does and asks Ali to return to the apartment. As morning comes, Ali shows Party, Biyah, Ance, and Chinta a video he edited expressing apology and positivity, and they reconcile. Ending the film, he is then accepted to a university, and Mia privately confesses regarding Ali to Alex. In a mid-credits scene, Suci asks Ali's cousin to fly to New York to meet him, which he does.
Cast Stars
Ali & Ratu Ratu Queens (2021) trailer:
View More Video Show All Episodes
Comments
Comments
Follow us on
News Telegram Discord